Sheikh Lotfollah Mosque (Persian: مسجد شیخ لطف الله‎) is one of the architectural masterpieces of Iranian architecture that was built during the Safavid Empire, standing on the eastern side of Naghsh-i Jahan Square, Isfahan, Iran.

Construction of Sheikh Lotfollah Mosque started in 1603 and was finished in 1619. It was built by the chief architect Shaykh Bahai, during the reign of Shah Abbas I of Persia. On the advice of Arthur Upham Pope, Reza Shah Pahlavi had the mosque rebuilt and repaired in the 1920s.

The entrance gateway, like those of the Grand Bazaar and the Masjed-e Shah, was a recessed half-moon. Also, as in the Masjed-e Shah, the lower façade of Sheikh Lotfollah Mosque and the gateway are constructed of marble, while the haft-rangi tiles (Persian: هفت‌رنگی, lit. “seven-coloured”, “polychrome mosaics”) decorate the upper parts of the structure. The creation of the calligraphy and tiles, which exceed, in both beauty and quality, anything previously created in the Islamic world, was overseen by Master calligrapher Ali Reza Abbasi.

he monument’s architect was Mohammad-Reza Isfahani, who solved the problem of the difference between the direction of qibla and gateway of the building by devising an L-shaped connecting vestibule between the entrance and the enclosure of Sheikh Lotfollah Mosque. Reza Abbasi’s inscription on the entry gateway gives the date of the start of construction. The north-south orientation of the Maydan does not agree with south-west direction of qibla; it is set at 45 degrees to it.This feature, called pāshnah (پاشنه) in Persian architecture, has caused the dome to stand not exactly behind the entrance iwan

Its single-shell dome is 13 metres (43 ft) in diameter. The exterior side is richly covered with tiles.Compared with the Shah Mosque, the design of Sheikh Lotfollah Mosque is quite simple: there is no courtyard, and there are no interior iwans. The building itself consists of a flattened dome resting on a square dome chamber.However, in contrast to the simple structure of Sheikh Lotfollah Mosque, the decoration of both interior and exterior is exceedingly complex, and in its construction the finest materials were used and the most talented craftsmen employed. Robert Byron wrote about this sight: I know of no finer example of the Persian Islamic genius than the interior of the dome: 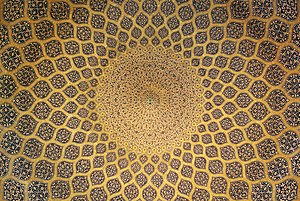 The interior side of the dome. The decoration seems to lead the eye upwards toward its center, as the rings of ornamental bands filled with arabesque patterns become smaller and smaller.

The dome is inset with a network of lemon-shaped compartments, which decrease in size as they ascend towards the formalised peacock at the apex… The mihrāb in the west wall is enamelled with tiny flowers on a deep blue meadow. Each part of the design, each plane, each repetition, each separate branch or blossom has its own sombre beauty. But the beauty of the whole comes as you move. Again, the highlights are broken by the play of glazed and unglazed surfaces; so that with every step they rearrange themselves in countless shining patterns… I have never encountered splendour of this kind before.

Must see Iran Via SoranJourny